I’ve been making my own birthday cakes since high school and this year was no exception. I wanted to spotlight one of my favorite flavors, (real) banana, and after a few days of deliberations, decided on cupcakes.

A banana cupcake recipe from the book Hello, Cupcake! by Karen Tack and Alan Richardson (2008) resulted in a dense, banana bread-like cake. I am a huge banana bread fan and the flavor was satisfying. As with any banana recipe, use very ripe, even black, bananas.

I paired the cakes with my go-to cream cheese frosting with a new twist. My friend/chef/ultimate foodie/supermom Lindsay suggested browning the butter in the frosting. Brown butter makes everything better. That’s a fact. The melted butter made my frosting a bit runnier than usual but the flavor was worth it. Just be sure to transfer the cakes to the fridge shortly after icing. 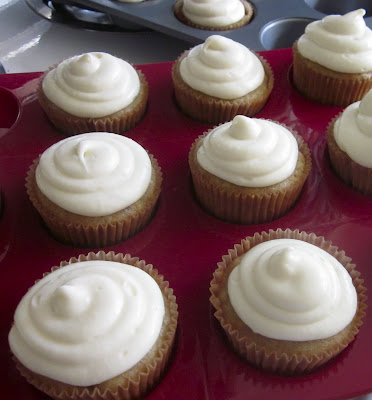 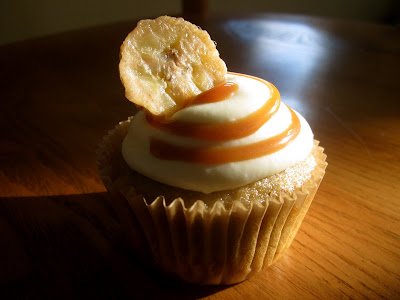 Piping bags: Not just for professionals!
Feel free to ice these or any cakes I make with a spatula, but a piping bag will give you that straight-from-the-bakery look. Buy yourself some piping bags and an inexpensive beginner's tip assortment and practice piping on wax paper. Making pretty desserts isn’t hard once you make friends with your piping bag!

I like Wilton’s disposable bags and own a variety of decorating tips. A round No. 2A or No. 1A work well for icing the cakes and a small round, No. 2 or No. 3, for the caramel drizzle. 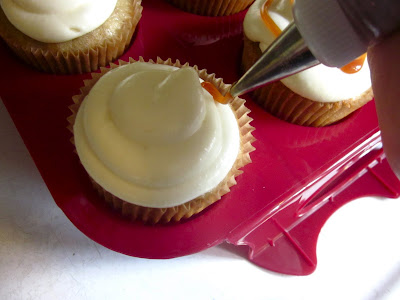 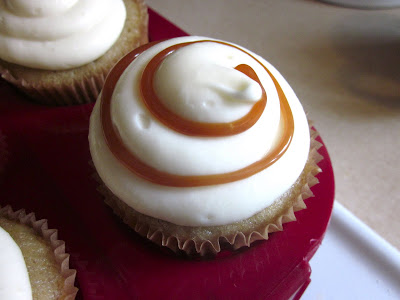 Preheat your oven to 350°. Line 18 muffin cups with paper liners. I like If You Care 100% unbleached large baking cups.

Combine the flour, baking power, baking soda, and salt in a bowl.
Mash the bananas with the buttermilk in a small bowl.
Beat the butter and sugar until light and fluffy with an electric mixer. Add the eggs, one at a time, beating well after each. Reduce the speed to low and add the flower mixture alternately with the banana mixture, beating just until blended. Stir in the vanilla.

Fill the liners two-thirds full. Bake 15-20 minutes until a toothpick inserted in the center comes out clean. Allow to cool completely before icing.

To brown the butter, heat a skillet over medium heat. Melt butter while whisking frequently. Light brown specks will begin to form at the bottom of the pan. Be careful not to burn the butter. Remove from heat and allow to cool.
Beat the butter, cream cheese, and vanilla with an electric mixer until combined. Add powdered sugar and beat until smooth and creamy.
Posted by Bekka at 12:59 PM