Earlier this month, I discussed my new obsession with adding dried lavender to my treats. Well that obsession had my oven preheating at 7:30 this morning. Shortly after opening my eyes, I thought about the fresh, local blueberries in the refrigerator and how nice they would be paired with lavender in scones. This isn't a far stretch from the lavender blueberry pancakes I've been making all summer but scones are different than pancakes, that's a fact. Scones pair well with coffee or tea, and are a perfect match for my yogurt and granola breakfast. Scones are also good for traveling if you eat breakfast on the run. 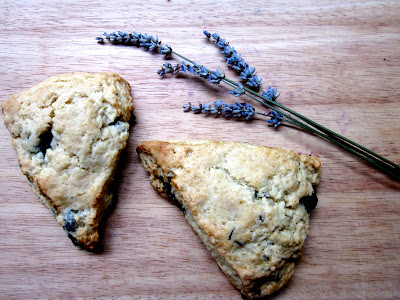 The base for this recipe is from my standard scone which I shared last September. This recipe has yielded the most consistent results and held up with a few changes today. Early morning baking is typically unplanned baking; inevitably I'm short on at least one ingredient. This morning it was the buttermilk. It's always the buttermilk. A simple substitution of milk and white vinegar works just fine and I've also used soy milk successfully. Of course, neither of these were in the fridge this morning. It's been an all-almond milk summer. We also didn't have white vinegar. I worried for a minute as I looked at the almond milk and apple cider vinegar, hoping there wouldn't be a trace of either flavor in the final product. When I'm standing at the oven in pajamas and slippers, however, I work with what I've got. I'll post the recipe below using buttermilk but if you're stuck like me use the following substitution: 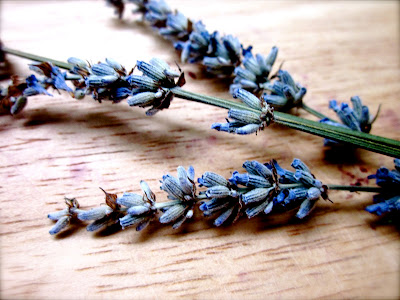 Adding dried lavender to baked goods is easy. I went a little heavy on the lavender this morning and used almost a tablespoon and a half. Just as I mentioned in the pancake recipe, use what you're comfortable with or leave it out completely.

In the past, I've had the most scone success using dried fruit and/or nuts. Every time I use fresh berries, I end up with blue or purple scones. The scones taste great but they aren't the prettiest and the dark blue color looks a little too much like mold. I tried a different approach today - I didn't fold in the blueberries and didn't use a biscuit cutter. After the dough came together in the bowl, I transfered it to the lightly floured countertop and patted it into a 1-inch thick round. I carefully pressed about 3/4 cup of blueberries onto the round and then folded the round in half to seal the berries inside. I folded the dough in half one more time and then carefully patted it back down into a round. Some of the berries fell out and I heard a few squish but the dough was still white - success! Usually, I use a biscuit cutter or glass to cut the scones into circles, which in this case would have inevitably squished the rest of my perfect berries. I decided to grab the sharpest knife in the house and cut the dough like a pizza into eight triangles. Twenty minutes later and we had warm, normal-colored scones for breakfast. 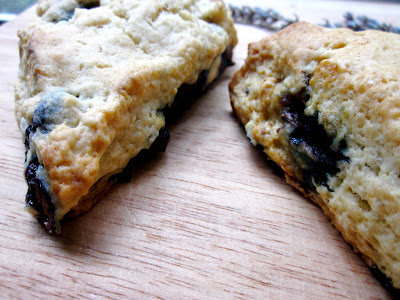 Preheat your oven to 400°. Line a baking sheet with parchment paper.

On a lightly floured surface, gently knead dough into a 1 in. thick round. Carefully press blueberries into top of dough. Fold dough in half twice to hold the berries. Press back down into a round. Cut into triangles with a sharp knife. Brush tops of scones with buttermilk.

Bake on center rack for 20 minutes. Serve warm.
Posted by Bekka at 8:35 PM