As soon as autumn arrives, everything is pumpkin; pumpkin soup, pumpkin ravioli, pumpkin coffee, pumpkin ice cream, pumpkin butter, pumpkin pie. Pumpkin, pumpkin, pumpkin. Imagine my surprise then, when I realized I have only posted one other pumpkin recipe in two years (this vegan banana pumpkin walnut bread last October)! So here we go... 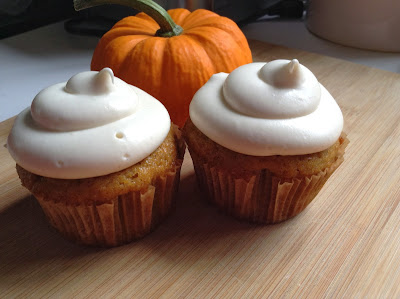 For several years, I've made the classic PB and chocolate combo for my dad's birthday. Take a peak at these cupcakes and you will see why. This year we broke tradition and decided on pumpkin cupcakes with cream cheese frosting. I was paging through the latest Food Network magazine not long after and found a recipe for pumpkin cupcakes in their "50 Things to Make with Canned Pumpkin" article.

The recipe starts as a spice cake and FN suggests doubling it to make cupcakes. I used Trader Joe's organic canned pumpkin, grown and processed in Oregon, which sells for $1.99 a can. Any pumpkin puree will do, just be sure not to use pumpkin pie mix which comes pre-spiced. Speaking of spices, FN calls for pumpkin pie spice which I substituted with cinnamon, nutmeg, ginger, and cloves. The picky side of me prefers to add them individually. My only gripe with the recipe is the TWO sticks of butter in the cake. I didn't have time to experiment with the fats/oils this time around but I'm determined to lower the saturated fat in the future. Top these spicy cakes off with a sweet frosting like the cream cheese frosting you have already seen me pair with carrot, banana, and more. 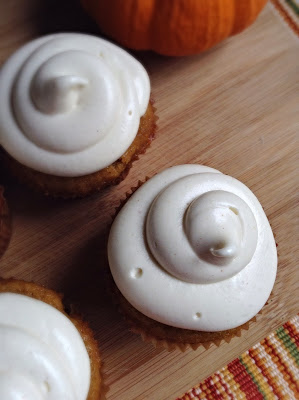 Preheat your oven to 350°. Line 18 muffin cups with paper liners. I like If You Care 100% unbleached large baking cups.

Beat butter and sugar in mixer until fluffy. Add eggs, pumpkin and vanilla. Stir in the flour mixture.

Fill the liners two-thirds full. Bake 20-25 minutes until a toothpick inserted in the center comes out clean. Allow to cool completely before icing.

Beat the butter, cream cheese, and vanilla with an electric mixer until combined. Add powdered sugar and beat until smooth and creamy.
Posted by Bekka at 8:39 PM